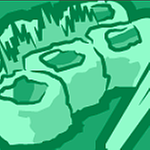 One user has intermittent connectivity with email client..

Its a kind of odd problem.  Out of a couple dozen people, this one user has constant problems connecting to email.

Sometimes he can use his email client (Thunderbird), other times it just rejects his login information.  There's no rhyme or reason to it, its seemingly random.  When he can't log in via client, he uses the webmail.  Webmail works fine most of the time.

At first I thought it was something wrong with his computer (running XP) or ethernet port (flaky wire connection?), but he recently got a new computer running Windows 8 and connects via WiFi, so the hardware, OS, and connection method are all different.  On top of that, I tried some troubleshooting from a different computer and was unable to even log into his webmail for several tries.

He connects using the same router as the rest of us, there are no firewall rules referencing his IP or MAC, and I've had problems with his account on different computers.

I'll redoublecheck the Windows firewall again to see if a Windows update or the antivirus might have automatically set something, but you got any other suggestions?  (I did try disabling the AV altogether and that had no impact)

As an example, he was unable to connect at all yesterday through the email client, although webmail worked fine.

This morning, he's able to connect via client, but for how long I don't know.

If it was me I would call Comcast and have them DELETE his mailbox and recreate it.  I'm betting it's got a corrupted piece of mail in it.