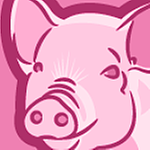 I had an SMC-8014 modem for several years and never had a problem.  Unfortunately, that modem bit the bullet a few weeks ago and a Comcast tech replaced it with a Netgear CG3000DCR.  I have been having nothing but problems with the Netgear with respect to intermittent connectivity problems.  I will be surfing the web, and all of a sudden a page will not load.  Sometimes the lapse is just a few seconds, other times slightly longer.  When the connectivity lapse occurs, if I logon to the gateway web console and go to the 'Administration', 'Diagnostic Tools' page and attempt a ping of say 'www.yahoo.com' it will either fail to get a response or sometimes fail to DNS resolve.

My configuration is as follows:

I have a static 5 IP block

I have disabled DHCP on the CG3000DCR

If i run a ping loop to www.yahoo.com from a console window on one of my machines I see requests fail in blocks sometimes and occassional high ping times of 200+ms (the average is ussuall 20ms)

I have had a tech come out and replace the modem with another CG3000DCR.  This made absolutely no difference.  The tech also did a line test and said things look OK.  He then proceeded to claim that perhaps the problems were due to "a mouse chewing on the wire in the wall" (no joke). There are no mice in my walls and I kindly informed the tech that prior to the Netgear I had no issues -- my local configuration has not changes at all (apart from the introduction of the Netgear)

I reiterate that I had no problems with the SMC-8014.  It gave me several years of reliable service.  I have another tech supposedly coming out in a couple of days.  Is there something I can change or try in my configuration to possibly resolve the intermittent connectivity? Is there something else I can look at?

think you could post your downstream/upstream signal levels? (on the netgear's "Gateway Summary -> Cable Modem" page).

search this forum, and you will find many stories of cases like this (i am one of them. periodic bursts of packet loss/extreme packet delays. i eventually dropped static IPs and went with a customer-owned Motorola modem because of it)

i've been collecting together a theory, that signals might be at fault, as i have worked with clients who have had no issues with this modem, and so far, all of them seem to have right at 0dbMv downstream power, and <45dbMv upstream power, as well as good SNRs. the problems seem to be happening at locations where the power/SNR readings are borderline.

yes that is my theory; your power levels are somewhat high, certainly not out of spec but COULD be potentially the root cause.

unfortunately, most areas are going to either the Netgear or a Cisco gateway device; if you can get the Cisco it would be preferable.

otherwise, if you can live without a static IP, i'd recommend getting a Motorola SB6141 and returning the rental. it would also save you some money

(btw, never noticed that the SNRs on the Netgear are displayed as "dBmV"

The Comcast tech came today and replaced the Netgear 3000DCR with an SMC-D3G he found lying around in his supervisor's office.  Honestly, I could not have been more ecstatic when I saw him walk through the door with the SMC.  I have been up and running without any issues ever since he replaced the Netgear.

Below is a screen shot of the SMC-D3G's channel info.  I find it interesting that the SMC binds fewer download channels and uses a different modulation on the upstream channel versus the Netgear.  To anyone having problems with their Netgear, I wish you luck in trying to locate an alternative modem. 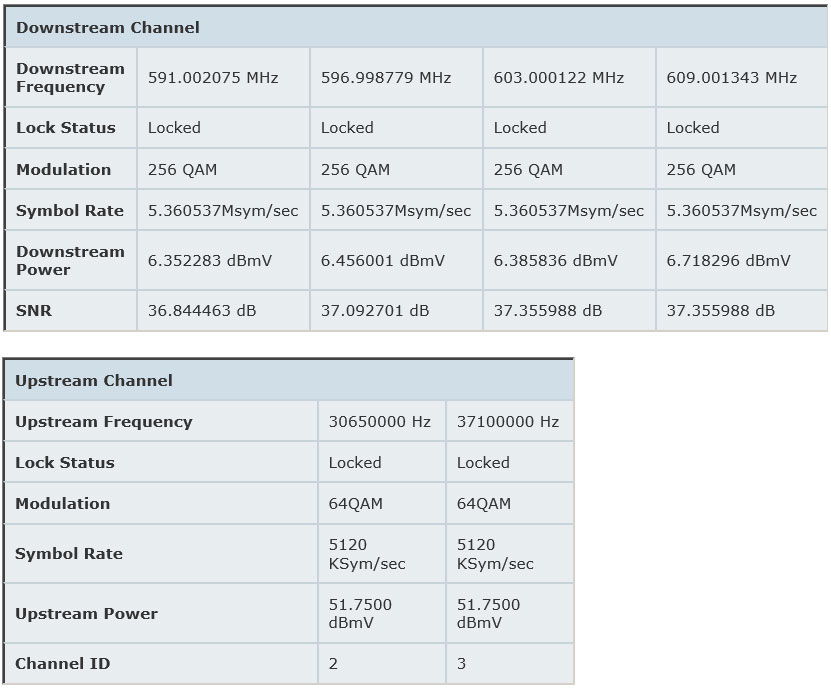 Comcast -- THERE IS AN ISSUE WITH THE NETGEAR, please address it! 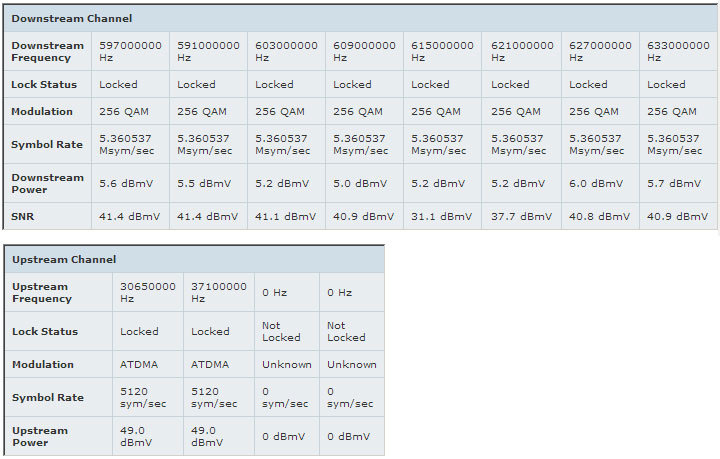 So your theory is that this modem is more sensative to the signal strength than my prior SMC-8014?

So I moved the modem into the basement to where the feed comes in off of the pole; below you will find the channel summary.  While the power values are higher, I still experience the exact same issues latency and intermittent connectivity issues.  Unless I climb the pole and stap the modem to one of the spikes, I can't get any closer.  I will reiterate once again that I never had any of these issues with my SMC-8014 and the modem is the ONLY THING which has changed in the environment.

The comcast tech is coming tomorrow. Somehow I have the sinking feeling things will not get better. 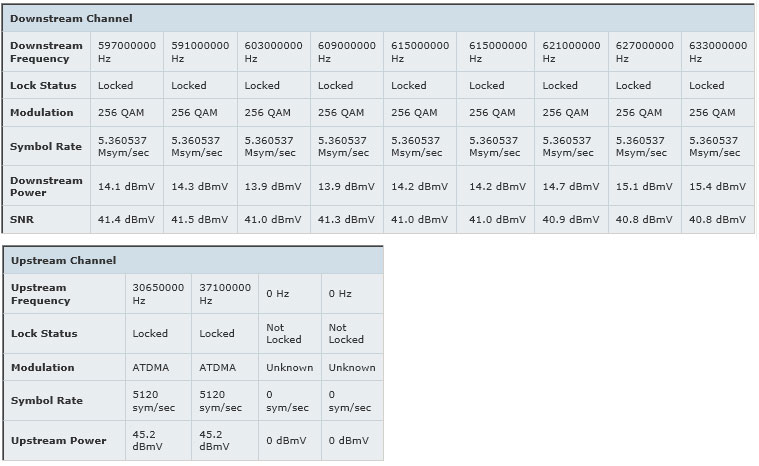 yeah i'm not surprised, your levels are way worse. downstream powers are so high, they're nearly unusable.

it does sound like some signal level issues worth looking into

I've been having the same issues. Every time, support blames it on my network hardware. These issues have not manifested until AFTER my SMC modem was replaced back in January of this year with this POS Netgear. In the past month, I think I've called them no less than five times requesting the modem to be replaced with an SMC or anything other than a Netgear.

I'm attaching copies of my internet connection regarding pings to external non-Comcast DNS servers. All of the red spikes are 100% packet loss. MultiPing was recommended by one of the techs I spoke with on the Business Support 800 number:

The modem I have has the following hardware/software configuration: