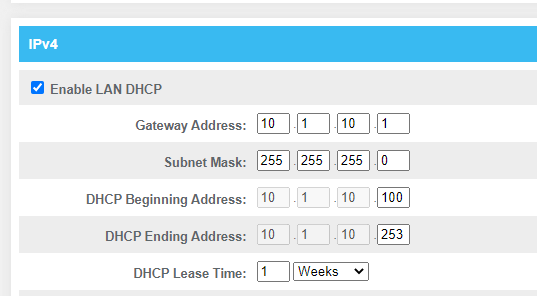 As of two weeks ago I am no longer able to add new port forward rules for ANY IP outside of the DHCP scope.  I am also unable to edit existing rules for IPs which are static / not in the DHCP scope. 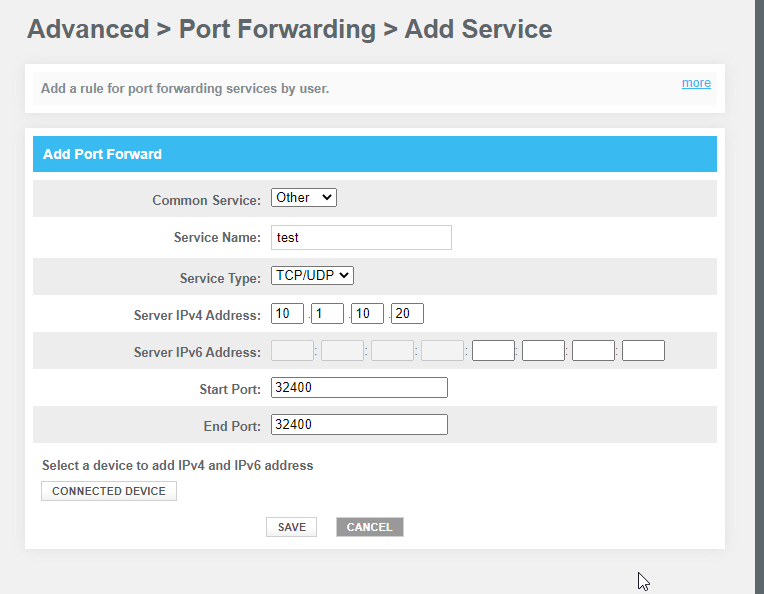 When I attempt to add a new rule I'm simply prompted with this very basic error window "Failure Please check your inputs!" It does not matter if I manually enter the IP or select the device from the CONNECTED DEVICE button / list the result is the same.
If I attempt to edit an existing rule for a device within my static range I get a similar window that reads "Unable to edit rule".
I restarted the modem numerous times that did not resolve the issue.
I've attempted to change the DHCP scope (to default) save - reboot - update it with what I require - save - reboot again.  This does not resolve the issue.
Beyond my better judgement I finally performed a factory reset on the device and now all my rules are gone and the problem persists!!!!
If I instead try to add the rules under Advanced > True Static IP Port Management it just tells me the IP I'm inputting isn't a static address.

Upon further troubleshooting I have learned the device will ONLY accept a port forward rule for an IP within the DHCP scope.  YES the option is UNCHECKED under GATEWAY > FIREWALL >IPV4 relating to disabling firewall for true static IP subnet only.  I've tried checking it save - reboot - try again - uncheck - save - reboot it doesn't matter I can no longer add static IPs as an input to the Port Forwarding section - where I WAS able to do this up until 2 weeks ago. 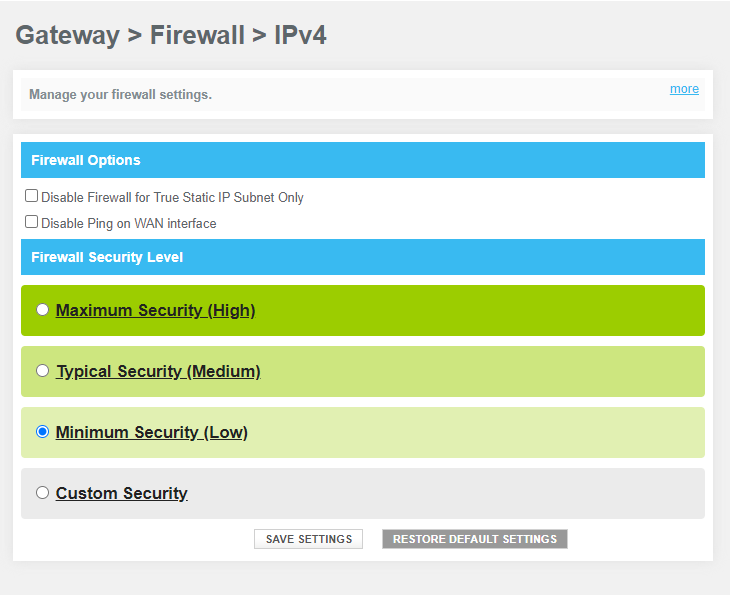 My original ticket for this issue was put in Saturday the 19th without resolution!!!  I've since called Comcast Support a minimum of 7 times.  I finally demanded the modem be replaced since I'm unable to get any type of competent support.  This of course did not resolve the problem.
I am confident the issue must reside in something changing in the software / firmware pushed to the modem.
Upon searching older threads here I found numerous people with similar issues and every single time someone from Comcast tells them to take it to PMs.  I WANT A PUBLIC RESOLUTION!
I am frustrated out of my mind as its been over a week now without resolution!!!  As I write this I am yet again left waiting for someone to call me back (from my 8th call yesterday) to tech support.

Hi there, thanks so much for taking the time out to reach out to the Digital Care Team here through the forums. I am so sorry for the delayed response. I know that having reliable internet is super important and you have reached the right team to help get this taken care of. Can you please send us a private message with your name, the full address, and the phone or account number?

To keep a log for everyone else who may read this.

I provided my account details to the Comcast rep via PM today.  They replied shortly after basically reporting exact behavior that I elaborated in my original post (inability to add a port forward for an IP outside of the DHCP scope) and asked me to confirm that was in fact the problem.

I confirmed that was the problem and currently awaiting a reply.

Today marks day 9 since my original ticket was logged without a resolution.

13 days and counting - I have lost what shred of patience I had left.

I officially give up on any support from Comcast.  If I had an alternative I would drop you like a bad habit.  Your "business class" use to hold value because of the support it provided.  Support is non existent now!  I honestly lost track how many times I called for help - I'd say over a dozen.  With half a dozen PMs here with nothing but the same lip service! "Someone will be in contact".  PATHETIC!

I resolved the issue myself by taking the offending constant out of the equation - the modem...by putting it in passthru mode and using an Untangle Firewall instead of their hot garbage hardware.

In my opinion the issue lies in your modem and the software/firmware.  Something changed as of recent and clearly specific functionality that existed in the past no longer does.  Thanks for the frustration Comcast.

Seems like Xfinity is only allowing ports to be forwarded on the DHCP range of the local network. Not sure why, possibly it's a bug, but to get around it. Change your DHCP start/end range to cover the local IP you are trying to forward, then setup your forward and then change the DHCP range again. Hope this helps.

Thank you so much for this. I was trying to set port forwarding today for the first time in ages, and the error that popped up ("Failed to edit") made no sense at all. And having to forward to a port inside DHCP range is bewildering; I would never have guessed. If I'm forwarding a port, I want it to go to a static IP that can never be supplanted by some other device that happened to get assigned that address. It seems insane.

The DHCP range setting is well hidden under Gateway/Initial Setup/DHCP Start&End Ip. And I don't know why, but it's taking over a minute to switch to different pages in the router config, which is infuriating when you're trying to find a setting. It really feels like they are trying to make it as hard as possible to do simple things. I'm not impressed with Comcast Business class. Starlink can't get here fast enough.

HOLY GEEEZ!!!  THANK YOU!! Sure thought my router was wrecked too. Glad I researched this before putting in that call.
I do like my Comcast business service. However, this was not a fun issue to get though for last few weeks as my deadlines for forwarding were approaching.
Thank you for this find and resolution. Was really getting worried.
Although I certainly can't agree with this nested option to be part of the modem's functionality it is what it is for now until they make it more user friendly.
Cheers.

Having this issue as well. This used to work but some update on the router must have broke it. Pretty ridiculous paying comcast monthly for a modem that can't provide this simple solution.

Having this issue as well. This used to work but some update on the router must have broke it. Pretty ridiculous paying comcast monthly for a modem that can't provide this simple solution.

Hello, @user_1ffa1e. I would love to look into what's happened with your router. Please send over a Private Message with your full name and address associated with the account to begin. Thank you!

This bug just came up on a Cisco DPC3939B. Port fowarding rules just stopped.  Of course you look at the server first with frequent updates but quickly determine it was the router. I reported the firmware version to Comcast but they could not tell me if or when changed - unhelpful. Could not add or edit the PF rules, but I could add a PF rule to a workstation. DHCP was off so again did not assume it was being used for a faulty range edit check. The ambiguous error message is no help (Failed to edit/add). The fix - if using DHCP on router,just edit the range to include the static server IPs  and hope that does not mess up! If not using DHCP on the router, you must first turn DHCP on to allow edits to the DHCP range, then edit the range to include the static IPs that are in the PF rules,then turn DHCP on the router back off. This is for IPv4. Worst part was I has seen this before on a different client but an forgot the issue was DHCP related because it is so counter-intiutive. Argh! the buggy firmware on Cisco DPC3939B is "DPC3939b_3.9p38s2_PROD_sey"  Most important step - complain to Comcast and Cisco this bug is still making rounds! Thank you to prior posters for the reminder.

This is a problem in my Comcast business class router as of 04-07-2022! Been working on it for HOURS! In the age of "working from home" you would think cisco/comcast would take this problem seriously. Any updates?

Hello @apike I would like to look into this closer. Can you send me a private message with your address and name listed on the account?

even if dhcp is off, turn it on and make sure the static ip is in the range, then turn dhcp off if unneeded or setup a reservation for the static ip. an experienced tech would normally setup static ips outside the dhcp range, but this is a bug in the firmware that shows up randomly, it even breaks existing rules, the traffic just stops forwarding and it makes no sense that the dchp range would be apply as a rule test for eligible forwarding IP addresses. I hope this helps!